This recipe has been languishing around un-posted since last year. I know, I know it’s only February, but that’s still about two months of me not telling you about this. Two months, you guise! OK, so it may not seem like that much of a loss, because smoked salmon isn’t everyone’s favourite, because it sounds weird and because quite frankly it is a little weird. But in a good way. I promise.

The reason we’re in this mess in the first place is simple: radishes. To be honest I just didn’t know what you were supposed to do with them. And then I decided, well, I’m an adult, I should be able to deal with some radishes. So I bought some.

Speaking of buying things, I’ve also acquired a few new gadgets since starting this blog. Things I thought it was worth investing in if I was going to actually start *measuring things* like some kind of *fancy* gentleman of the kitchen. Guys, meet my measuring scales.

I’m not sure what to call them. What’s a good name for a set of dapper red scales like these?

Anyway, I’ve gone off topic – we’re here for the funky salad. So, off we go! Fishy floral arrangements!

It kinda looks cool, right? And yet there’s something off-putting about it. A retro-ish vibe that seems to highlight how quickly good taste can become suspect. Or maybe it’s just the thought of cured pink salmon flesh coiled into the shape of a flower that’s doing it. But something here works. Salmon, crunchy things, the addition of dill, which for some reason reminds me of holidays (perhaps because of all the potato salad and smoked salmon appetisers floating around at summer soirees). Paired with a weird-ass gris blanc from the Barossa it went down a treat (two months ago, when we were celebrating *Housemate Christmas*). Maybe it was all the wine that made it ok.

Directions:
Cut potatoes into bite sized cubes. Submerge potatoes in water in pan and bring to boil. Turn down and gently boil for about 10 minutes until just tender. Set aside to cool. You’ll need a mandolin or a lot of time to cut all the apple, radish and cucumber into thin slices. Do this and toss together so they’re all mixed somewhat evenly. Serves four.

Hey, erry body: I’m back! With peeling forearms, a collection of wines and some concerning double-billing on my debit card. Although my time at Woodford was marred by several unfortunate events, the least of which being a head-cold, I had a blast: several times abandoning my friends for running-around-to-see-everything, dancing like a big doofus to Sharon Jones and the Dap Kings (among other things), and generally breathing in dust and good vibes.

New Zealand with Mum and Sarah was similarly awesome. On the Routeburn track we walked for three days across, through and up snowy mountain peaks. The weather was nice enough that we went swimming in the ice-cold streams alongside the trail. Oh, and we got a bit sweary at the scenery. Pretty fucking picturesque, ay? 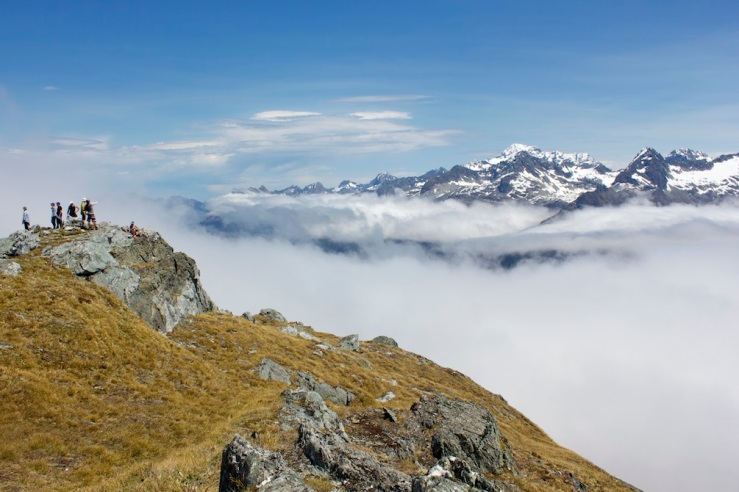 It was as though we got more Aussie the moment the plane hit the tarmac. I’m pretty sure I heard Mum genuinely use the word crikey.

I wasn’t really looking forward to coming home. What with adult responsibilities beyond the duty free alcohol allowance. But actually, it’s good to be back. The first day home I came across a van full of Labradors training to be guide dogs at the park! And I can cook again! Not just the economical soups and egg salads of hostel stays (everyone should stay on a sheep farm cum backpackers with their family at least once), but meals with tens of spices or ones that call for things from jars. Like this fish dish, which is extremely simple, but which calls for tamarind and fresh coriander and bean sprouts: ingredients not so widely available in Middle of Nowhere NZ. 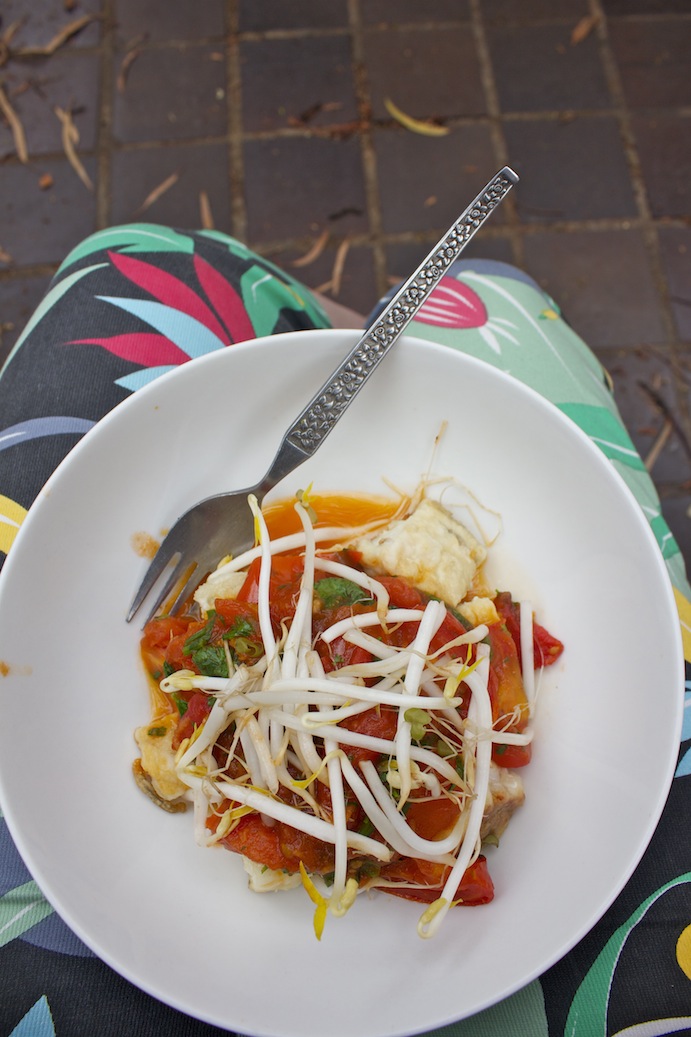 I know it’s all just a measure of time and ultimately meaningless, but I’m excited for this still-new year. It helps that I’ve had this time to recuperate from 2012. This also helps: at 4:00AM on new year’s day, with a meagre 1.5 hours sleep under my belt, I followed a congregation of fellow festival goers up a small hill to where monks were gathered to chant in the dawn. And despite the lack of rest, the head cold, the shitty year that had been: the first glimpse of 2013 was pretty spectacular. Pretty fucking picturesque.

The fish is pretty good too. 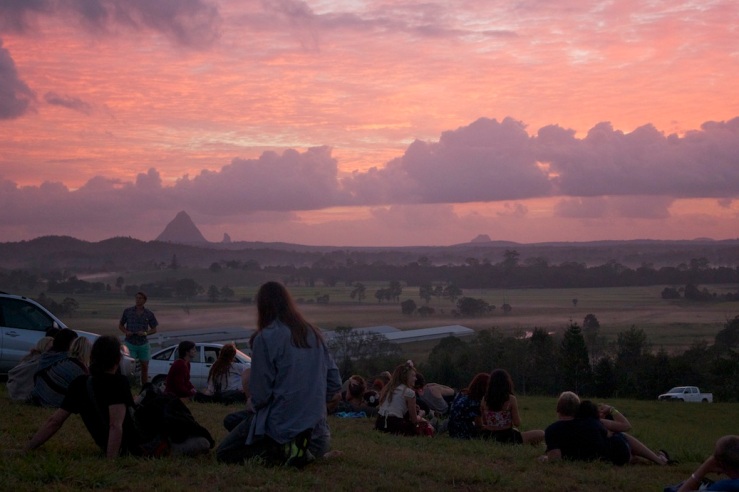 Cut fish into cubes and roll in flour on a plate. Heat oil in a pan on medium. When pan is hot fry fish pieces one side at a time in pan until both sides are light golden brown. In the meantime cut tomatoes into large crescents. Grate ginger. When fish is done set aside. In the same pan (if you like) cook tomatoes, ginger and tamarind paste. Add 1.5 tbsp of sugar. Let tomatoes cook until reduced, but still holding form. Taste. Add more sugar if needed. Chop coriander roughly. Take tomatoes off heat and add coriander. Serve fish with tomato mixture spooned on top. Garnish with bean sprouts.

Note: This amount is probably enough for two. I like to eat it as is, but you could serve it with rice if cooking it for a larger group.