Sometimes everything falls apart in your hands, like so much vegan chocolate cake. (Not that I’m being disparaging about vegans or vegan food, it’s just my mum made me a vegan chocolate cake for my birthday and it was amazing, but cru-u-mbly). Then again, sometimes you only think things have fallen apart, when really, had you thought things through, you would have realised what you already knew: it is impossible to ruin haloumi cheese. Initially I set out on a quest for baked fetta with sweet slices of summer peaches. But how to make that into a meal? Perhaps the container of messaged kale taking up 1/4 of my fridge space would be the answer. And I could switch the fetta for haloumi – haloumi being firmer, more ready to survive a good tossing.

I should have known from the start that baking haloumi was risky business, but I threw it in a dish with sliced white peaches and some red onion anyway. Deciding that kale was a little overwhelming on its own, I mixed one cup of kale with two cups of mixed salad greens and awaited my tray of baking fruit and cheese.

It all came out a bit of a mess, purple juices bubbling towards the haloumi side of the dish leaving the border cheese pale, deformed and clinging together. Nevermind though, the cheese on the edge of the pan was nicely golden and the salad turned out tasty enough, thanks to the indestructible deliciousness of cheese in general.

If I had my time again there are a few things I would change. Firstly, despite desperately wanting to reduce the amount of washing up anyone has to do, the peaches and the cheese need separate dishes. Secondly, I’d change the kind of leaf to a few simple handfuls of baby spinach, which is softer and subtler than kale, but nicer wilted than mixed salad leaves. Finally, I’d add some hazelnuts to the mix, just to give the salad some semblance of structural integrity. As an alternative you could leave the peaches fresh and just pan fry the haloumi, maybe adding some mint to the salad. I’m sure this version would be just as nice, especially in the heat we’ve been having. All in all I’m sure I’ll make this again, just a little differently. Which is good, because it means I’m learning, even if it’s stuff I thought I already knew. 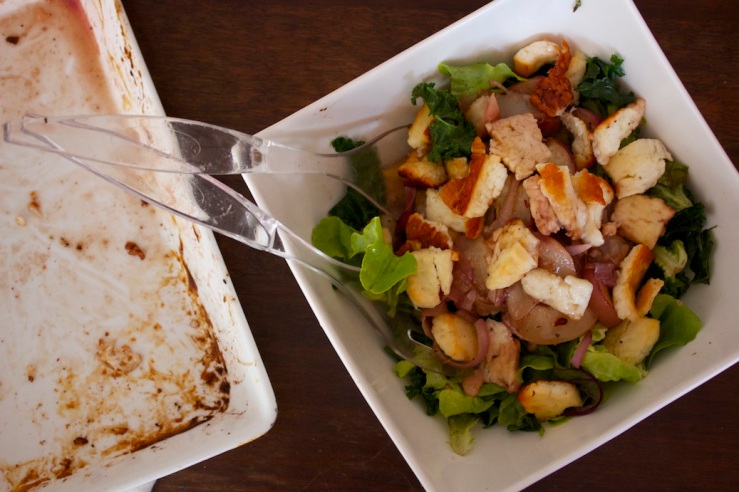 Preheat oven to 200 degree Celsius. Slice haloumi into bite-sized pieces and arrange sparsely on tray or baking dish. Put in oven. Slice peaches into thin wedges and onion into cemi-circles. Add to second baking dish with vinegar and a good grind of pepper. Put second dish in oven. Leave trays in over for 15mins or until haloumi is golden on top. In the meantime add spinach leaves to salad bowl. When cheese and peaches are cooked, leave to cool for ten minutes. Finally add warm ingredients to salad bowl, finish with hazelnuts and mint if you want it.