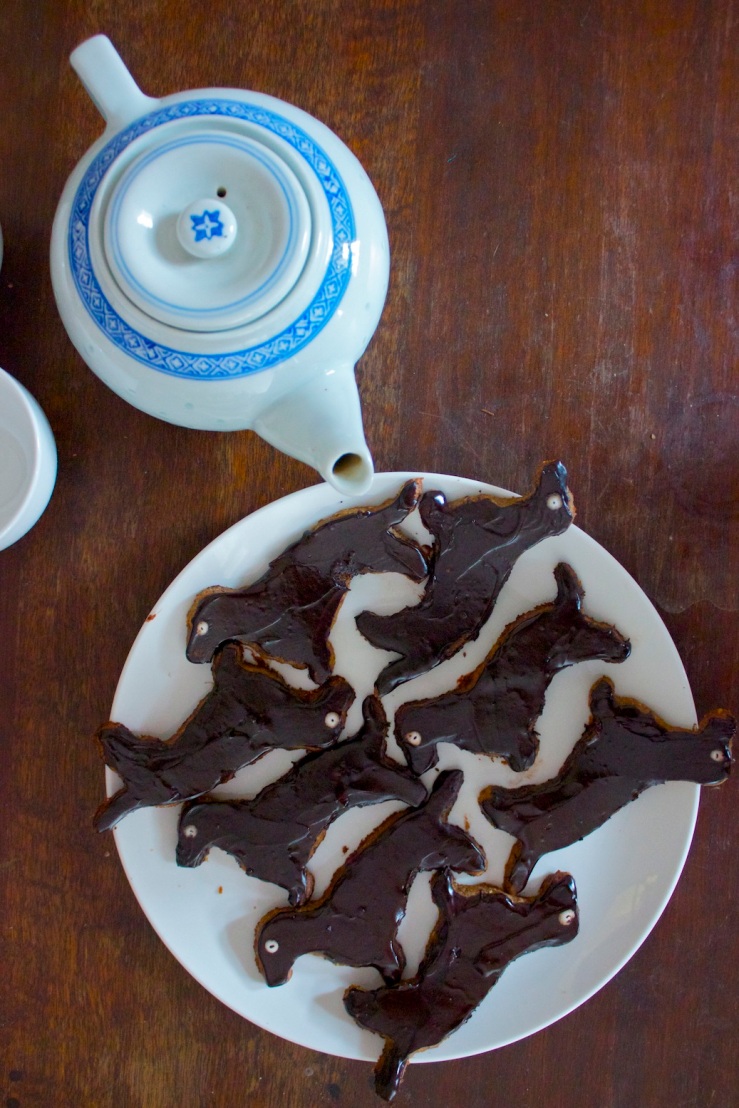 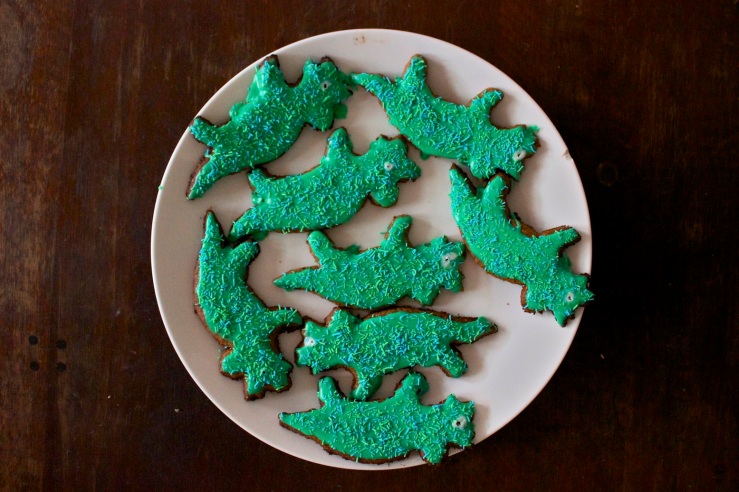 Believe it or not, I have only used this dachshund cookie cutter once since buying it about a year and a half ago. Luckily, not only is my sister’s enthusiasm for sausage dogs equal to my own, but her enthusiasm for gingery baked goods is unsurpassed. So, when she was visiting last week we set out to bake some ginger wieners and stegosaurus. 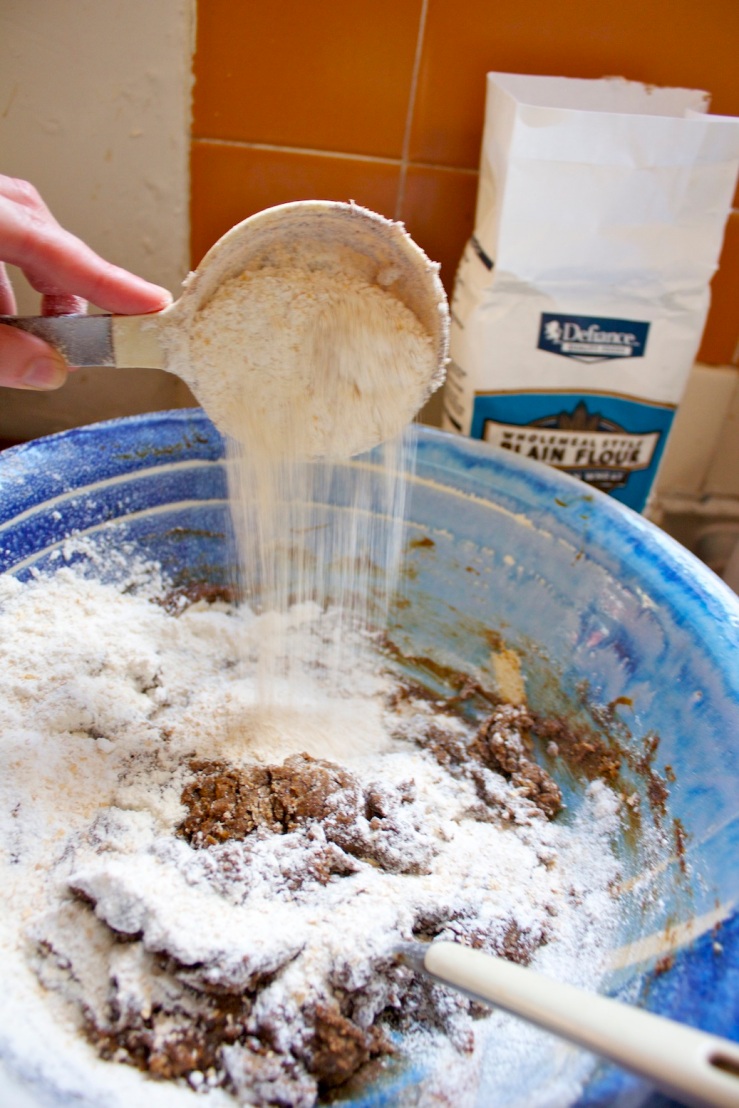 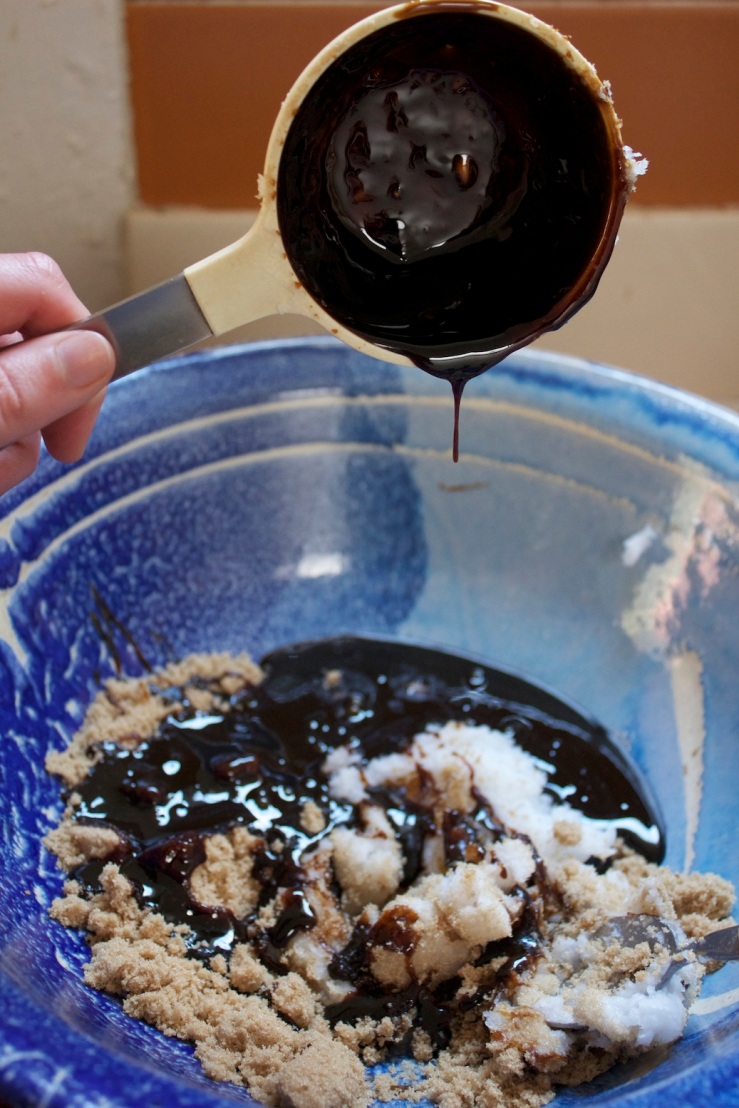 Setting out to create a dairy free gingerbread, I googled a few recipes. But in the end we turned to my old favourite, substituting a few of the ingredients for dairy free/heathier options. We went for coconut oil instead of butter, which tasted weird in the batter (some of which we may have eaten raw, with icing), but which when baked blended in perfectly. For the flour we used a combination of almond meal, wholemeal flour and plain. 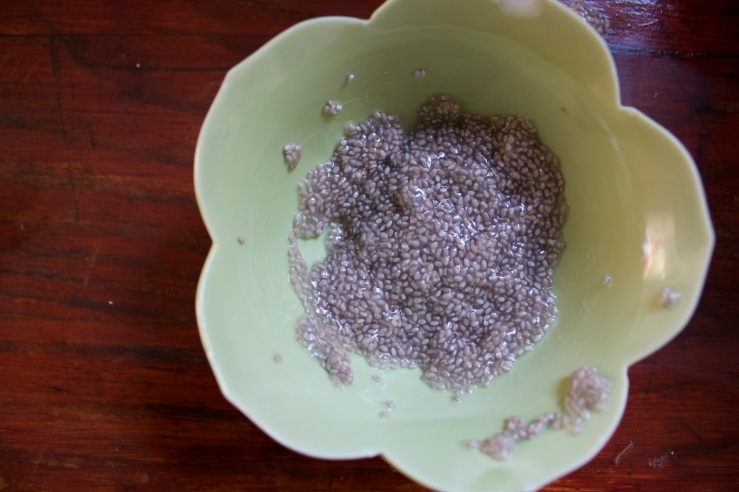 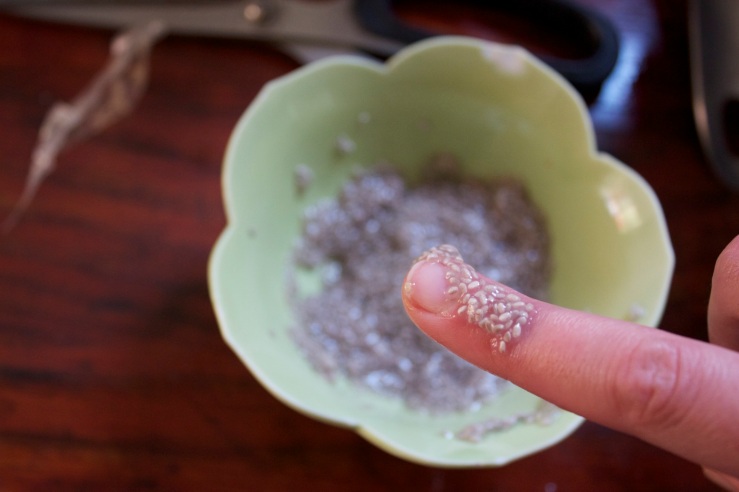 Actually I had to make this recipe twice, since the first time I only photographed the finished product. The second time I had no eggs in the house so used chia as an egg replacer, making them vegan, which turned out great. 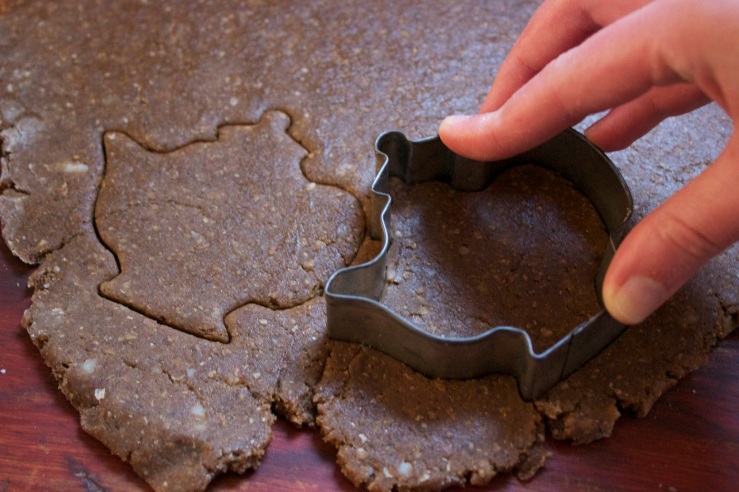 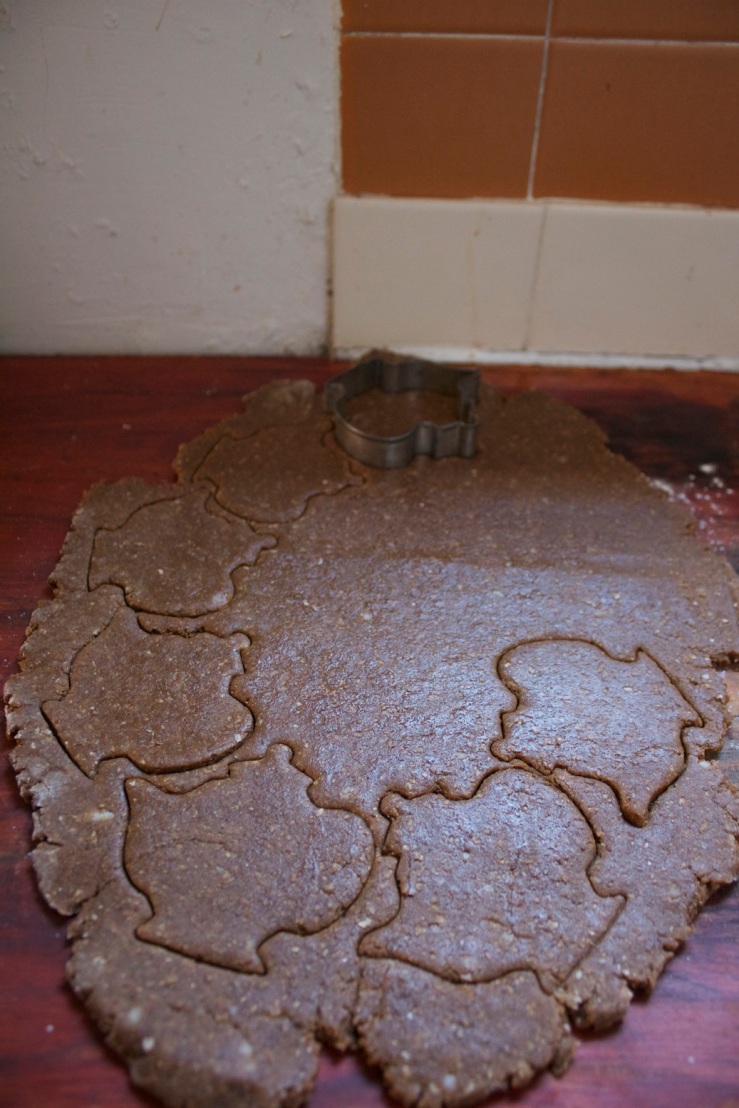 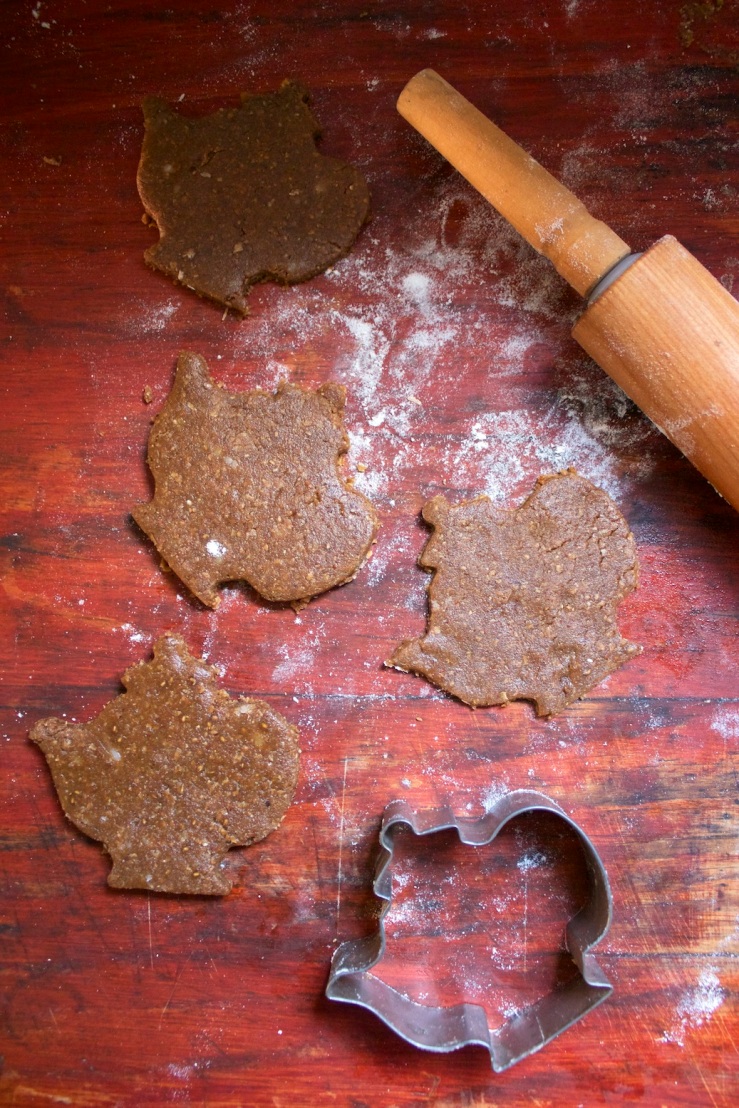 Miraculously this recipe results in some of the best gingerbread I’ve ever made. The combination of ingredients makes the dough easier to handle, which means less extra flour for rolling, resulting in a softer biscuit. Plus, the almond meal and wholemeal give the gingerbread an appealing speckled appearance, and a chewier more robust texture, which holds the oodles of spice I like to put in my cookies just perfectly. 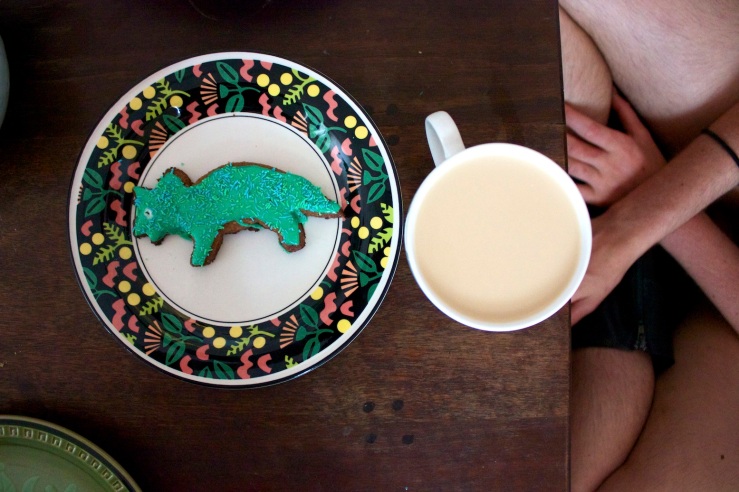 Because when it says 1 tbsp of any spice you always put in, like, twice that, right? I know I do. This recipe uses the real amount of spice you should put in. Dial it back a notch if you’re not into the potent tasting things. Anyway, Sarah and I ended up only wanting to eat one each, but didn’t want to miss out on trying them both. So we broke them down the middle and made little mutant gingerbread things! 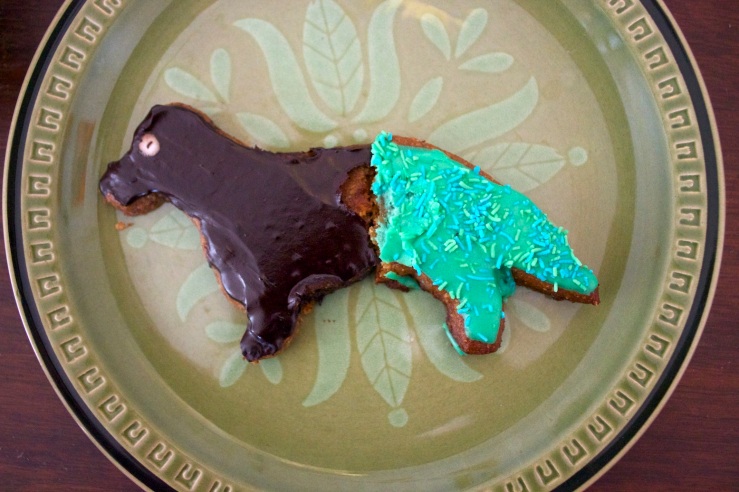 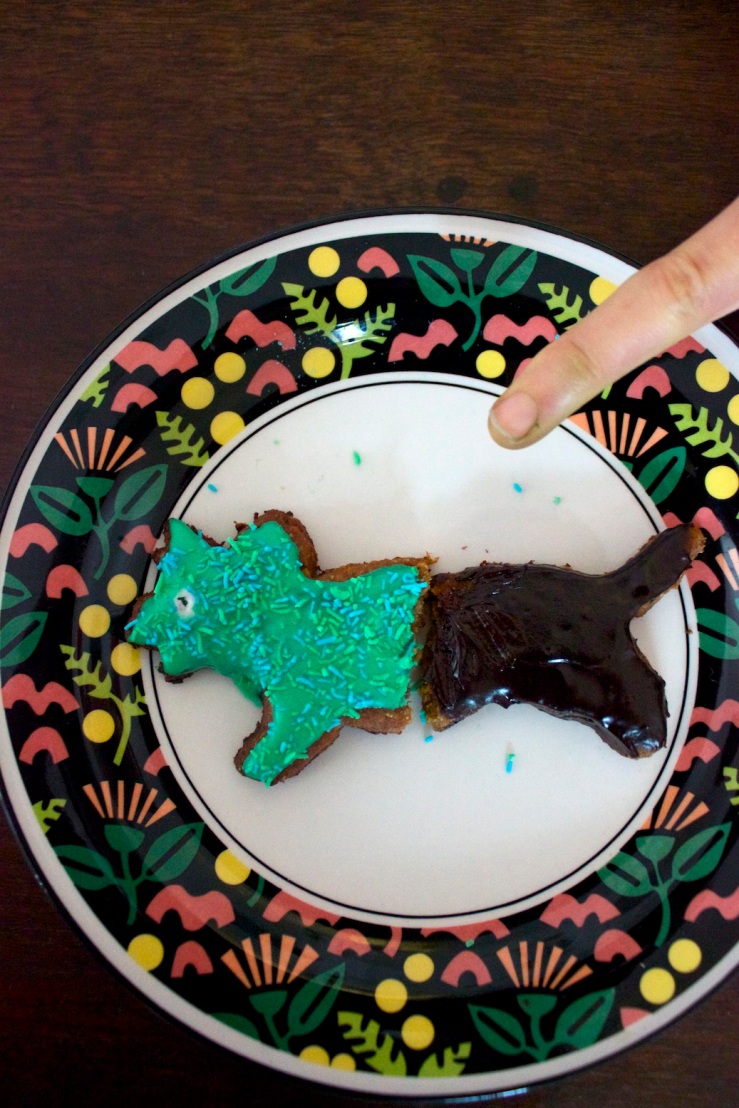 The second batch were just boring old teapots. But they were just as delicious and appropriate as study fuel. 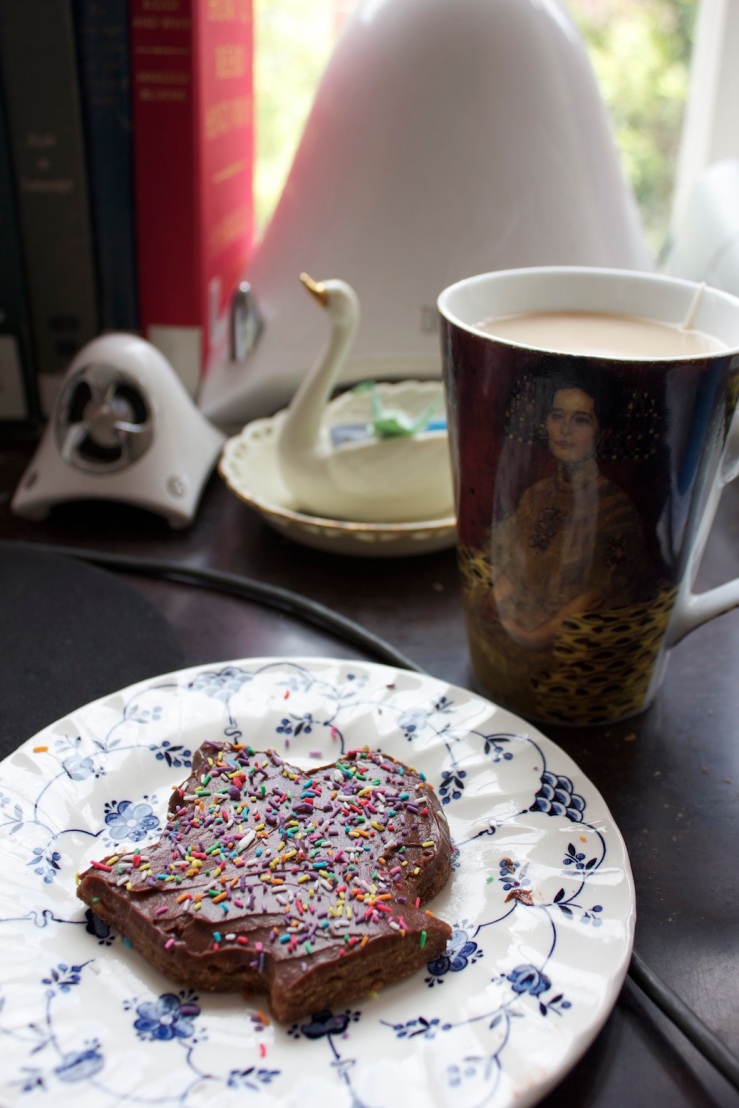 Preheat oven to about 160 fan forced. Combine coconut oil, sugar and molasses. Add egg yolk. Gradually add in dry ingredients until mixture forms a firm dough. Refrigerate dough for at least half an hour, until firm. Roll out dough with a rolling pin, or a big cylindrical jar or glass. Cut and lay out on baking trays. Cook for 10 minutes and lay out to cool. Keep the oven on.

While the cookies are cooling beat egg white until it forms soft peaks. Sift in icing sugar. At this point you can set aside a spoonful if you want to give your critters eyes. Add food colouring of your choice to the rest of the icing. At this point Sarah made a second batch of icing with cocoa replacing some of the icing sugar and we used that to ice the dogs. Just have fun with it. To make the eyes we used toothpicks, which we first dipped in the white to put a blob where we wanted an eye and then dipped in the brown to make a second smaller blob in top of that. When your cookies are iced whack them back in the over for a minute to set the icing. Let the cookeis cool a little: and you’re done! Go make a cup of tea.